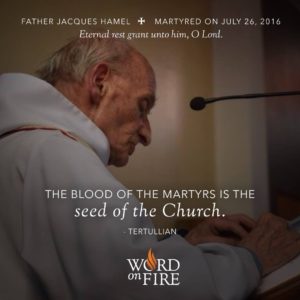 This morning I was shocked and saddened to read of the brutal killing of Father Jacques Hamel, a Catholic priest in France.  Father Hamel was assisting at a small rural parish while the pastor was on vacation.  While saying Mass, Islamic terrorists entered the Church, forced him to his knees, and slit his throat reportedly while someone was taping the attack.  I cannot imagine the horror.  I gasped, then cried when I read the news.  Here was a man, a retired priest helping a brother priest, who was offering up prayers to God as he had done so many times before.

The Lord has sworn, and will not waver; “You are a priest forever in the line of Melchizedek.”

We have several retired priests in our county.  This week, our pastor is on vacation, and one of those retirees is covering weekday Masses.  Another said Saturday evening Mass earlier this month, while our pastor was presiding over a wedding at his former parish.  With the general shortage of priests in our country, here we are actually quite blessed.  The Sacraments are never far away.  I know I really should take advantage of them more, especially in these uncertain times.  Secularization threatens to silence us and new laws try to tell us our beliefs are bigoted, leading some people to question what is real and true and right.  I believe in Jesus Christ and His Church.  I never want to take Him for granted.

When it comes to abortion laws, I have often said I would gladly go to jail before referring someone to an abortion clinic.  But would I be willing to die?  I’d like to think yes.  I hope I would.  But it seems so unlikely that I would ever have to make that choice.  If I was confronted by someone who demanded I renounce my faith or die instead, would I have the courage of the early Church martyrs, who willingly suffered a bloody death in the Colosseum?  Or those of our modern day, who have been beheaded or burned to death in the Middle East…all for the sake of the Name?

My prayer is to have such a faith…strong, resilient, but mostly so deep that others notice it too.  Not for my sake, but in order to lead others to faith in Christ.  A faith so radical that giving up everything in this life is a blessing because of the promise of Eternal Life.  The history of the Body of Christ, the Church, is rich with stories of martyrdom. Today while we grieve here on earth, the Body has become a little bit richer.

Father Jacques Hamel…may the angels lead you into paradise!