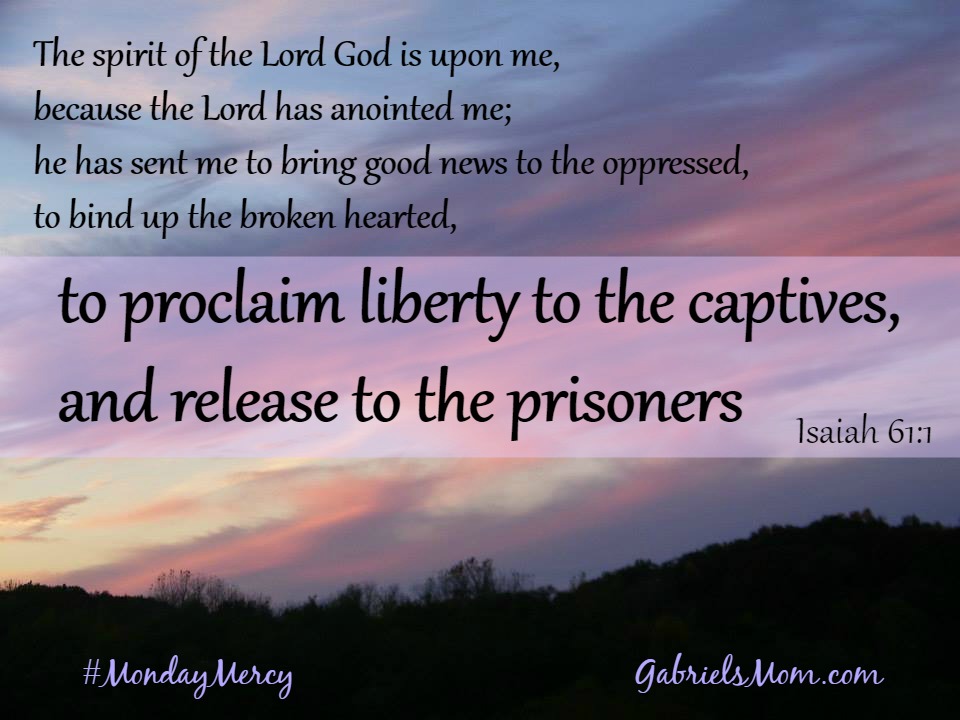 As  I pondered which work of mercy I wanted to look at this week, I finally settled on this one:  Ransom the Captive.  It is an interesting concept in our time.  When I hear the word “ransom” I think of kidnappers demanding money from parents.  When I hear “captive,” I think of hostages in a bank robbery or frightened runaways caught in a trafficking ring.  How can I possibly participate in this work of mercy?

In some ways, this work of mercy can be addressed by looking at criminal justice reform in our country.  Sentences are not handed down consistently across numerous demographics, and some do not seem to match the severity of (or lack there of) the crime.  But again, what can I do?  I am not in a position of authority, especially one where I could release prisoners who were wrongly convicted.  I am not a law enforcement officer who can investigate and break up a trafficking ring.  This work of mercy seems out of my reach.

And yet, maybe not.

In the literal sense of releasing prisoners, this is out of my reach.  And let’s face it; most prisoners should not be released anyway.  But in contemporary US society, the flaws of our criminal justice system can be seen through news reports and research articles. Admittedly, you can’t believe everything posted (especially in social media) but there is plenty of evidence to see we have problems in this area.  For some people and organizations, confronting these flaws is their passion.  Addressing the issue of wrongful convictions is important, and The Innocence Project is one group that has helped bring justice back into the lives of many families. There is H.O.P.E. for Me is an organization that was founded by a trafficking survivor and reaches out to rescue those still trapped in violence, addiction, and fear. The founder, Dr. Katariina Rosenblatt, worked with the Florida legislature to change how they deal with minors caught in prostitution.  To be quite honest, I never even pondered this issue before.  (Because these girls and boys are minors, they cannot consent to having sex.  They are victims, possibly being trafficked, not criminals.)  On a very different note, some people are facing charges due to religious beliefs that conflict with modern social changes.  Alliance Defending Freedom and Life Legal Defense Foundation, among other groups, are working diligently to protect religious and free speech liberties, such as the case with David Daleidan.

I can share this information here and on Twitter and Facebook.  I can speak out when I see an injustice being committed.  I can challenge people to rethink the notion of revenge over mercy.  One such example is that I oppose the death penalty.  I do not believe executing murderers makes sense, and it certainly doesn’t bring the murdered victim back. Opposing the death penalty does not mean I think inmates on death row are all innocent.  It does not mean I want them coddled in prison and released early.  It means I believe in the Sanctity of Human Life from conception to natural death. This is not a popular view among many of my friends who oppose abortion.  But I speak out any way.  When I share news about David Daleidan and The Center for Medical Progress video tapes, I am confronted with claims of “significantly edited” material.  By watching the heart wrenching videos myself, I can address their claims.  I can also point out flaws in the pro-choice arguments (e.g. Even the forensic review done by Fusion GPS, hired by Planned Parenthood, acknowledges that actual content was not altered.  All newscasts and investigative reports “edit” their videos for time and impact.)

So here are just a few ways we can participate in this corporal work of mercy:

When I started pondering this work of mercy, I had a completely different idea in mind.  It definitely focused more on the spiritual aspects of ransoming the captives.  Perhaps I can write about that another day. There are many ways people are held captive, and many ways in which we are called to set them free.

May the Mercy of God bring you true freedom today.