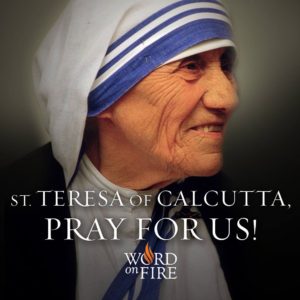 Monday was the Feast of St. Teresa of Calcutta, and Facebook reminded me of this post from 2 years ago. At that time, she was Blessed Teresa, but as you probably know, this beautiful woman was canonized on Sunday. So yes, she is a Saint with a capital S! Since I haven’t done a Wednesday #WorthRevisit post for a while, I thought this would be perfect. (As a side note, the 7 Quick Takes link up has moved to http://thisaintthelyceum.org)

I realize that 7 Quick Takes are usually random and unrelated, but today is the feast day of Blessed Teresa of Calcutta (“Mother Teresa.”) She was a major voice for the unborn, the poor, the abandoned. I decided to share a few thoughts on this truly heroic woman.

“By blood, I am Albanian. By citizenship, an Indian. By faith, I am a Catholic nun. As to my calling, I belong to the world. As to my heart, I belong entirely to the Heart of Jesus.”

Okay…that is simply beautiful, isn’t it?

Her birth name was Gonxha, and she received the named Sister Mary Teresa (after Therese of Lisieux) in 1928 when she entered the Sisters of Loreto in Ireland, desiring the life of a missionary. She left for Calcutta just a few months later, and taught at a girls school. She made her final vows in 1937, becoming a “spouse of Jesus.” It was then that she became known by the name most of us recognize: Mother Teresa. She served and ministered in that school for 20 years.

Always being open to God’s leading, Mother Teresa did not stop there. While on retreat in 1946, she heard a “call within a call”…and thus began a journey that would lead to the Missionaries of Charity which was (and is) dedicated to “the poorest of the poor.” Her years of service to the poor of Calcutta inspires people to this day. Many people continue to serve in this religious community, not only in Calcutta, but around the world.

This Catholic nun, working in the slums of Calcutta, caught the attention of many people in the media. She was small in stature, but a giant in courage and conviction. As her ministry would grow, she always gave glory to God. And she was never satisfied; never felt that she had done enough…because she could always see Jesus in the poor. She knew she needed to continue HIS work.

In 1979, Mother Teresa was awarded the Nobel Peace Prize. The world recognized her charity, her authentic love, her commitment to service. I have a feeling that those in attendance did not expect all that she had to say in her speech. Here is just a brief segment:

“And today the greatest means – the greatest destroyer of peace is abortion. And we who are standing here – our parents wanted us. We would not be here if our parents would do that to us. Our children, we want them, we love them, but what of the millions. Many people are very, very concerned with the children in India, with the children in Africa where quite a number die, maybe of malnutrition, of hunger and so on, but millions are dying deliberately by the will of the mother. And this is what is the greatest destroyer of peace today. Because if a mother can kill her own child – what is left for me to kill you and you kill me – there is nothing between.”

She spoke boldly…and I love that about her.

One of my favorite quotes from her is this one:

Finally, I want to include these words, often attributed to Mother Teresa. It is reportedly inscribed on a wall at a children’s home in Calcutta. However, it is apparently an adaptation of a poem by Kent M. Keith. It is commonly called “Do it Any Way”

“People are often unreasonable, irrational, and self-centered.
Forgive them anyway.

If you are kind, people may accuse you of selfish, ulterior motives.
Be kind anyway.

If you are successful, you will win some unfaithful friends and some genuine enemies.
Succeed anyway.

What you spend years creating, others could destroy overnight.
Create anyway.

If you find serenity and happiness, some may be jealous.
Be happy anyway.

The good you do today, will often be forgotten.
Do good anyway.

Give the best you have, and it will never be enough.
Give your best anyway.

Blessed Teresa of Calcutta, pray for us!

One Reply to “#WorthRevisit: St. Teresa of Calcutta”