I have a fabulous Mother-in-law!  Her name is Dorothy, and she is filled with joy!  I rarely see her upset.  She is down-to-earth, loves to laugh, is dedicated to her family, and is a feisty Euchre player.

She and her husband raised my husband Bruce quite well, thankfully.  He is also pretty low-key (usually) and loves to laugh, even if it is at his own silly puns.  He takes care of me in so many ways.

Sometimes when we go to a Padan family gathering, I sit near Dorothy and we talk about whatever happens to be going on.   Our health, the latest cute things one of my new great-nieces or nephew have done, planting flowers…just about anything.  She genuinely cares about me and I about her.

Now, when Dorothy and I get into a long conversation, perhaps laughing hysterically, do you think that upsets my husband?  Of course not!  Does he think that my time with her takes away from my time with him?  No!  Bruce is very happy that I get along with his mom, because it actually helps me be closer to him. 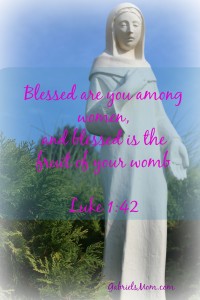 I realize that some people who read this page are not Catholic.   Many think that attention given to Mary takes away from Jesus, but it doesn’t.  It enhances our relationship with Him.  I am not a theologian, so I won’t get too deep into this matter, but I just want to share a few highlights:

“So Bathshe’ba went to King Solomon, to speak to him on behalf of Adoni’jah. And the king rose to meet her, and bowed down to her; then he sat on his throne, and had a seat brought for the king’s mother; and she sat on his right. Then she said, “I have one small request to make of you; do not refuse me.” And the king said to her, “Make your request, my mother; for I will not refuse you.””

In this passage we see several things.  First, the Queen Mother interceded on behalf of Adoni’jah.  Second, the King actually bowed to his mother and placed her at his right…showing her great honor. Third, the King doesn’t refuse his mother…after all, he loves her.

Jesus is the King of Kings!  The fulfillment of all that was promised in the Old Testament.  Of course, His Mother Mary would then be the Queen Mother!

So yes, we as Catholics celebrate Mary’s birth.  When we pray the Rosary or other traditional prayers, we are asking for her intercession.  We are asking her to take our prayers to  her Son…basically putting in a good word for us!

Jesus followed every commandment, including honoring His Father and Mother.  Faithful Catholics around the globe and across time are simply doing the same!

http://demo3.goodvibeswebsitedesign.co.uk/corporate-creative-news/ Today's Gospel and Post-Abortive Women
I didn’t plan on writing today.  I spent much of my afternoon stamping and updating…
8 years ago - by gabesmom93 Ningyang Previous
strony randkowe dla młodzieży Remembering that Day
It’s September 11th…and once again people are remembering where they were and what they were…
8 years ago - by gabesmom93
Next